from Gapers Block - a Chicago publication 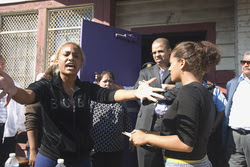 Several dozen parents and students completed the third night of an occupation of a Pilsen elementary field house Friday night, protesting the planned demolition of the allegedly dilapidated structure. The sit-in has withstood several visits by the police - at one point they threatened arrests then abruptly left after more than 100 students, parents and community members pushed past barricades to support the protesters - and scored the promise of an interview with Ron Huberman to discuss turning the field house into a library for the school. 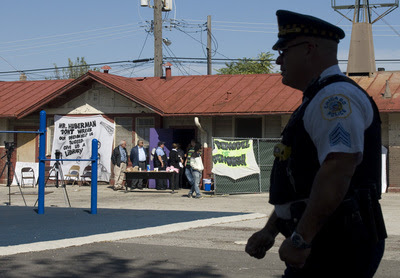 The field house of Whittier Dual Language School, at 1900 W. 23rd St., has been used as a center for after-school programs and community meetings. According to Gema Gaete, an activists with Teachers for Social Justice and Pilsen resident, parents found out that the building was set to be demolished in November 2009, when a budget detailing the proposed spending of Tax Increment Financing (TIF) money allotted to Whittier was released. 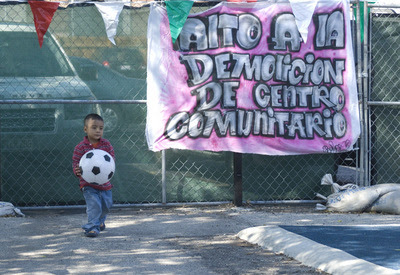 The itemized budget allocated $356,000 to tear down the field house, Gaete said, and started a call from parents to "repolish, not demolish." Community members hired their own engineer, who Gaete said determined that the building could be salvaged with minimal investment.
CPS spokeswoman Monique Bond said the district lacked the money to renovate the building. "(With) the budgetary constraints we are under, nothing is going to happen," Bond said. "That building has to come down." 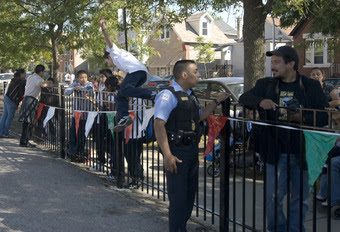 The protest has so far seen a couple of iconic moves from CPS - a locksmith came and changed the locks on the field house as parents and students gathered inside, and shortly after the protest began a sign was put up in English and Spanish saying that the building was unsafe for occupancy. After this sign was removed by protesters, CPS security officers put up another sign saying "Off Limits: Do Not Enter" by order of the City of Chicago Inspector.
Anastacia, the mother of two Whittier students and one Whittier graduate, said that it was essential for the school to have an extra library. Speaking with bloodshot eyes filled with tears, Anastacia, who asked that her last name not be used for fear of arrest, said that the teachers required students to do research, but many of the classroom libraries are not sufficient, and many students do not have access to computers.
Despite the threats of arrest and sleepless nights, Anastacia said the fight was worth it because "we're gaining what we want." 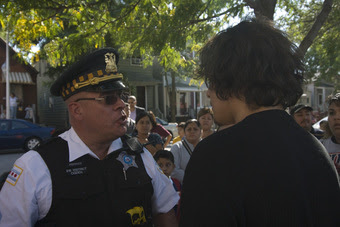 School activism in Chicago has a history of direct actions - in 2001, activists and parents in Little Village went on a hunger strike to revive a forgotten promise for a new school in their high-density neighborhood. Eventually, the city put a $5 million down payment for what would eventually become the Little Village Lawndale High School, also known as the Social Justice High School.
Whether the Whittier parents will have a similar success remains to be seen, but meanwhile the occupation continues.
Yana Kunichoff is a fellow at Truthout.org. Photos by Sarah Goke/Creation Cinema
— Mechanics
Email ThisBlogThis!Share to TwitterShare to FacebookShare to Pinterest