The Monster
Two years ago the Minneapolis Federation of Teachers (MFT) created the Minnesota Guild of Public Charter Schools and were officially approved by the state to be a sponsor of charter schools.  This effort was financed by two Innovation Grants from the American Federation of Teachers (AFT).  The Innovation Grants were funded in part by the Gates Foundation and the Eli Broad Foundation. 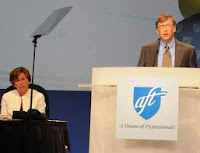 This is yet another attempt to do what Pasi Sahlberg called, "trying to do the wrong thing, righter."

Creators
Like our AFT and NEA presidents (Weingarten and Van Roekel), many of our local leaders in Minneapolis believe it is possible to work with those who are trying to privatize our public schools, or in this case, to beat them at their own game.  Both our current MFT President, Lynn Nordgren, and a former president, Louise Sundin, are behind this effort.  In fact both of them are board members of the Guild, along with Sandra Peterson, a former President of the Robbinsdale Federation of Teachers,  former President of the Minnesota Federation of Teachers and former Co-President of Education Minnesota.

They claim we can "show the reformers how to run a school."  While teachers should be an integral part of shared school leadership, the charter school system is a tool of the neo-liberal reformers.  Even if the Guild creates a "great" charter school, it will only empower the corporate reformer agenda.  You can't defeat the master, using the master's tools.

The Guild's Director is Brad Blue, a long-time educational entrepreneur, and a classic salesperson.  He sees no contradiction or irony in having the Guild sponsor a talk by Pasi Sahlberg, an opponent of the corporate reforms.  Mr. Blue has simultaneously worked as the Director of the Guild, while opening another charter school called Upper Mississippi Academy (UMA).  His UMA charter school was launched with the help of Charter School Partners and possibly the Walton Foundation, as noted on the Charter School Partners' blog:

Charter School Partners has a goal of opening 20 more charter schools in Minneapolis in the next five years.  Minneapolis is already one of the most charter-school-saturated cites in the country.  One of the leaders of Charter School Partners is Katie Barrett Kramer of the local "reformer" dynasty - the Kramers.  The CSP board includes Chris Stewart, a former Minneapolis School Board member and vocal defender of the corporate reform movement, and Daniel Sellers, former President of Teach for America - Twin Cities and current president of MinnCAN.

This Saturday, the Minnesota Guild will hold an open house at the office of the Minneapolis Federation of Teachers.  Charters are not real public schools, and the measures of success (standardized tests) use to determine which schools work "best" are destructive.  In reality, the Guild is our Frankenstein's monster, and it will help to destroy the true system of public schools we, not only hold dear, but recognize as essential to a socially-just democracy.

It's time to gather the torches and pitchforks.  This monster must be stopped! 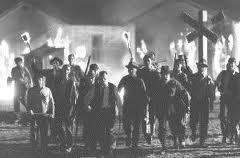 Over 20 years ago, Minnesota created the first charter school law in the nation, and now the chickens are coming home to roost.  Minnesota, especially Minneapolis and St. Paul, are the targets of corporate reforms from across the nation and our own home-grown privatizers.  They are looking to enrich themselves and are destroying our system of public schools in the process.

Valerie Rittler, an active member of PEJAM, a Minneapolis teacher and parent, sums up the assault in the following commentary.  This was originally published on the MN2020 webpage on March 26, 2013.

Rupert Murdoch, the media mogul owner of Fox News and dozens of other companies around the world, recently announced he was moving into the “education” business. He said, "When it comes to K through 12 education, we see a $500 billion sector in the US alone.”

Murdoch is part of a growing list of corporate executives who see schools as profit centers. The education reform industry and their privatization efforts that have virtually destroyed the public education systems in Chicago, Philadelphia and New Orleans have been quietly, and not so quietly, targeting the Twin Cities.

Since 1995, budget cuts and poor policy decisions have closed at least two dozen public elementary schools in Minneapolis, according to Eric Myott, research fellow at the University of Minnesota’s Institute on Metropolitan Opportunity (IMO). The impact has been larger class sizes and fewer neighborhood schools.

As our public schools deal with insufficient resources and increasing challenges, they need more support, not less.

But a group of unelected, corporate oriented, “education reform leaders” have announced that they are pushing to develop 20 more charter schools in Minneapolis. Last year, Charter School Partners, a pro-charter school lobbying and advocacy group rolled out their “Charters 2.0” initiative, in which they will use public funds to finance “the creation and growth” of charter schools and fast-track the approval process for new charter schools.

As part of their coordinated “Education Reform” effort, organizations from around the country are pouring money into an aggressive lobbying and public relations efforts to promote the expansion of charters.

According to recent lobbying reports, StudentsFirst, Inc., the controversial Sacramento-based education reform group headed by Michele Rhee, spent $99,122 over the past two years on media advertising to “influence legislative action” and other lobbying efforts. Meanwhile, the New York City-based 50CAN, Inc. spent $144,396 to lobby here. The chair of 50-CAN, Minnesota’s own Matthew Kramer, is also the CEO of Teach for America, a group that has also been spending money in Minnesota to impact legislation and campaigns.

What the national and state charter school proponents fail to reveal is that their “solution” to the challenges facing public education in America is failing.

The greatest threat of all is that charter schools are undermining the fundamental American principle that public schools should be governed by the communities they were built to serve. But one need only look at the Board of Directors of these various charter schools to see where education reform is taking us. Hiawatha Academies, for example, has a board of executives from major corporate entities such as United Health, Best Buy, Standard Health, and U.S. Bank. Similar evidence can be found with dozens of other charters. In some cases, the charter chain headquarters are not even located in Minnesota.

It is time for our elected leaders to put a stop to this attack on public education and re-dedicate themselves to rebuilding and renewing the public schools of Minneapolis and St. Paul.

North High School in Minneapolis was to be closed in 2010 and replaced with a new District sponsored charter school.  While parents, teachers, and the community were able to stop the closure of North High, the District still sponsored the charter high school that opened in 2012 less than a mile from North High.

Another Minneapolis school, Cityview Elementary, was closed by the board just months after their failed attempt to close North High.  Cityview was replaced with another District sponsored charter school called the Minnesota School of Science.  This is the same charter school that told the district this past summer it would not help to mainstream special education students, because it would lower their test scores.

After losing students for a decade, Minneapolis started to experience an increase in school age children in the fall of 2011.  Even before this, the District's efforts to "right size" its schools had led to overcrowding and increased class sizes.  Normally, this would be good news for a school district and all efforts would be made to accommodate the growing student population.  Although two school buildings have reopened, the Minneapolis School Board sees this as an opportunity to open even more charter schools.

During the last Minneapolis School Board meeting on March 12th, the board voted to sell a school building to a to the Charter Schools Development Corporation on behalf of the Hiawatha Leadership Academy charter schools.  So rather than re-opening the building to address overcrowding and create space for new students, the board has abandoned its responsibilities to Minneapolis students. 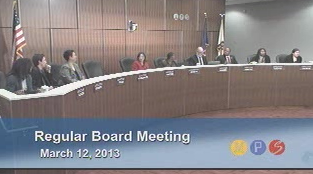 By sponsoring more charter schools, the school district seems to think they will not have to go through the ugly process of telling parents and students they are closing their schools.  They will just allow charter schools to absorb the growing student population.  They are all but telling students, especially minority and low income students, to try their luck with a charter school.

This is part of a Minneapolis District - Charter Collaborative Compact signed in 2010.  It also follows the plan set forth in 2008 by National Alliance for Public Charter Schools to replace urban school districts with a collection of charter schools as they are doing in New Orleans, Detroit, Philadelphia, and other cities.

The District - Charter Compacts being promoted by the Gates Foundation are sold as a win-win-win for charter schools, public schools, and students.  In fact only charter school operators are winning.  The drive to privatize is destroying public schools, and our students are paying the price.
1 comments
Email ThisBlogThis!Share to TwitterShare to FacebookShare to Pinterest
Links to this post

We All Need to Fight for Our Public Schools, Not Abandon Them