PEJAM Stands with the North Carolina Association of Educators

Stand with the North Carolina Association of Educators! 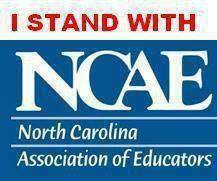 North Carolina's legislature and governor are in full ALEC mode.  They are busy passing laws that range from the ridiculous (sentencing a woman to up to thirty days in jail if her nipples are exposed) to the outrageous (allow people to carry their loaded guns on playgrounds).  However, voter suppression and the privatization of public education are the items that are truly dominating their legislative agenda.

Voter suppression legislation has been empowered by the recent damage done to the Voting Rights Act by the Supreme Court.  For details of this "nightmarish set of anti-voting measures," see Brendan Fischer article in PR Watch.

The assault on public education also includes a long list of bills.  North Carolina Association of Educators and other advocates of public education are trying to raise awareness and build support to defeat this legislation.  They posted the following summary on their Facebook page:

TOP 10 Things Every Educator Should Know About the Budget

2. Provides NO pay increases for educators, continuing North Carolina’s race to the bottom of national salaries. In 2007-08 North Carolina was ranked 25th in the nation in teacher pay, last year our state was 46th. With no additional pay, next year North Carolina undoubtedly will be at the bottom.

4. The North Carolina Budget eliminates career status for all teachers. Senate legislation, that received no public hearings in the House, was placed in the budget to eliminate career status for teachers. The new standard requires each school district to identify the top 25% of effective teachers without providing any criteria on how to accomplish this ranking of professionals. Teachers will be placed on a 1, 2, or 4 year contract. The top 25% will be given the option of receiving $500 to compensate them for the loss of due process rights. NOTE: the new system will be phased in over the course of the next five years.

5. North Carolina no longer values educators who work on their continuing education through masters degrees. Beginning in the 2014-15 school year, educators will receive no additional pay for a masters degrees unless their job requires it, such as counselors, school psychologists, etc. Those currently paid for their master’s degrees (or will be paid for a master’s degree in 2013-14) will be grandfathered in, according to the way the bill is currently written.

6. Grades Schools (A-F), 80% based on standardized test scores, 20% based on growth. No other variables will be considered in this grading.

7. Eliminates the Teaching Fellows Program, once viewed as a national model for recruiting teachers into the classroom, the program is no longer funded.

9. Retired educators will receive NO Cost of Living Adjustments (COLA).

10. The General Assembly will be back next year.


Please go to their page and support them in any way you can.
https://www.facebook.com/wearencae

PEJAM stands in solidarity with the NCAE and other defenders of public education.

Posted by: Rob Panning-Miller
7 comments
Email ThisBlogThis!Share to TwitterShare to FacebookShare to Pinterest
Links to this post