I am continually amazed by the education “reformers” who are apparently unfazed by their own continual contradictions.

They argue that seniority bidding rights leave struggling students with the least experienced teachers and yet they want to fill those same schools with inexperienced and under-trained Teach for America (TFA) teachers.

They claim to be the leaders of the "new" civil rights movement, fighting for social justice.  They then create schools on the backs of teachers and staff who are required to work 10 hour days at school, and then be "on-call" until 9 or 10 p.m. each night to answer any and every question a student or parent may have.  Many schools also have classes on Saturdays, resulting in teachers working 60 to 70 hour weeks.  Many charters also have extended school years.  What does this teach students about social justice?

They criticize public schools as relics of the industrial age and then praise charter schools that operate as assembly lines.  I'm not sure the irony is recognized by anyone in this video about Rocketship Education charters.  I believe the comparison to the Model T is intended to show the "innovation" of the charter model, and yet it simply shows the assembly line approach is what most charters are all about.

Charters claim to make their students "college and career-ready," or as Rocketship Education claims, "Rocketeers are well positioned along a path toward expanded opportunities in Middle school, high school, college and life."  Yet, when you look at the scene with students spending an hour and a half of their day in the "learning lab," you can't help but see this as their future. 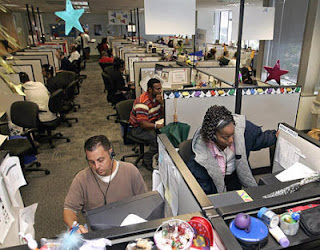 This is How Democracy Ends -- An Apology

The following blog was originally posted on December 18, 2012 by Kris L. Nielsen on his blog Middle Grades Mastery.

Almost a year ago, I offered my time to the middle school at which I was employed to give a two-night presentation that promised to ease parents’ concerns about the Common Core State Standards (CCSS) and the Connected Mathematics Program (CMP).  I was given kudos by my boss, my coworkers, and many of those parents.  We talked about the future, the upcoming tests by the Smarter Balanced Assessment Consortium (SBAC), and we even did some hands-on math demonstrations.  It was a good time for me, and I hope those parents can say the same.  My message was simple: trust us–we got this!

Some of them were still skeptical, and they should be praised for that skepticism.
First, I want to offer you my apologies.  It wasn’t long after my presentation that I had a crushing realization that the entire thing (minus the hands-on stuff) was completely misguided.  I felt like a flip-flopper, but I’ve always valued the truth more than feeling good.  So, I’m here to clear the air.  The truth hurts and it should start scaring the hell out of you, because your children are your most precious gift and you will do anything to protect them.

The whole reason I was part of the team that put those presentations together was to ease your worry about the changes that were coming.  I’m here to retract everything I said.  You should be worried.  Very worried!

I was wrong.  The Common Core State Standards is a sham, the Smarter Balanced Assessment Consortium is an instrument of devastation, and it’s all run by the process you see in the following Venn diagram (don’t you love Venn diagrams?):

Before I start sounding too nutty, let me get down to the reality.  You’ll see that I’m not exaggerating.
America has long been known–despite our problems–as the country of freedom, innovation, and wealth.  There are several reasons for this, not the least of which is our democratic and free public education system.  Prior to NCLB in 2002 and Race to the Top eight years later, standardization was limited to SAT and ACT tests, NAEP and PISA tests, and graduation exams for Advanced Placement courses.  We valued music, art, drama, languages and the humanities just as much as valued science, math, and English (for the most part).  We believed in the well-rounded education.

Now, the Common Core State Standards has one goal: to create common people.  The accompanying standardized tests have one purpose: to create standardized people.  Why?  Because the movers and the shakers have a vested interest in it.  It’s about money and it’s about making sure all that money stays in one place.

It’s been happening for a few years already.  StudentsFirst, ALEC, the Walton and Broad and Gates Foundations, and other lobbying groups have created a false crisis in American education.  They want you to believe that America is in sad educational shape so that they can play the hero.  However, what they’ve begun is a snowball effect of legislation that devastates public education, teachers, and an already underfunded school system so that they can replace the public system, the unions, and the government employees with private systems that promise to pay less, bust unions, and remove benefits and pensions.

Teach For America is a prime example of a way to steal government funding, place it in the hands of private corporations, and remove that pesky career (tenure) teacher problem.  It’s worked like a dream–the average TFA teacher stays in the classroom for about 2-3 years.  Only a few remain for 5 or more years.  So, the new American teacher is a mass-produced, temporary worker in an ongoing assembly line.  Cheaper?  Usually.  And they don’t complain about pay, pensions, or benefits, since this is just a step in their career ladders.

Which means that students don’t have highly-qualified and seasoned teachers leading their learning anymore.  Even worse that that, TFA teachers are prepared and trained with test data as the be-all-to-end-all of priorities.  These teachers only know effectiveness by the scores their students receive on standardized tests.

Cooperation? Collaboration? Creativity? Communication? Critical thinking?  Life skills?  Only if there’s time (which there isn’t) and don’t expect it to be integrated or cohesive.  That’s not what the training is for.  Our students are now part of a larger plan–to prepare them for the “college and career readiness” laid out by the “job creators” on Wall Street–the ones that want your kids to understand that a job is what they’re trained for and that they are lucky to have, so stop whining about your pensions and benefits.  And forget about belonging to one of those pesky unions–we will have outlawed them completely by then.

But more importantly, all of the skills linked above lead our students to be profound, critical, and meaningful participants in a modern democracy.  Some would argue that our days as a free country for the people and by the people are limited, and running out fast.  If we continue to support the path that our nation’s educational system is on, we will speed up the end of our democracy.  When students are forced to learn for the sake of a score and are denied the opportunity to think and reason and question and appreciate the world in which they live, they are all the more easy to control and deny basic rights.

It’s already happening.  I despise watching people discuss and debate issues in this country these days.  No one knows how to do it.

America did not become what it is today because of common people.  We celebrate our diversity, exceptionality, and bravery at the same time that we are attempting to bury those traits.  The world is following our educational models of the past few decades at the same time that we are turning our backs on those successful models.  We are digging a grave for our democratic process at a time when we should be paying extra special attention to keeping it healthy.

Our next generation of learners can save us and keep us strong through their diversity, ingenuity, creativity, friendliness, cooperation, and forward thinking.  And their dreams.  The Common Core State Standards, standardized tests, and privatized teacher corps are stifling those dreams.  Our democracy will ultimately be the victim.